Just realized I can’t even find the basic hidden binding anywhere online (except in CoffeeScript, for some reason.) For eff’s sake, guys. Direct link to gist (And yes, I could quite easily remove the jQuery dependency, were I not lazy. But since pretty much everything I’ve been working on for at least a year has […]

Have been meaning to clean something like this up and share it for a while. There seems to be a lack of Knockout.js extensions online these days. The curse of a stable codebase that’s no longer the latest/greatest thing, I guess. Anyway, since it feels like I must’ve rewritten this same code half-a-dozen times now, […]

Profanity is an odd beast. Practically everyone knows it when they see it; but the more you try to break down exactly makes certain words obscene and others not, the harder it becomes to explain. As fast as language evolves and changes, there’s only one thing you can be certain of: somewhere, there’s always someone […]

Link to the GitHub repository So here’s something I’ve been meaning to share for a while. Back in January, I signed up to part of the control team for the Cleveland Megagame Council‘s annual event. What’s a megagame? Imagine a board game that involves over 40 different players with about 5-6 controllers riding herd over […]

So I’m not going to explain. I’m not going to make excuses for ignoring this blog for so long. I’m just going to go ahead and get started. And talk about some of the things I’ve learned and been looking into over the past year. Node Mainly, I’ve really gotten into Node.js. I was skeptical […]

… Node.js is kind of awesome once you get the hang of it. And given the right project, of course. More details sooner or later.

Sat down last night and taught myself enough of Knockout.js (one of those newfangled JavaScript MVC frameworks) to make a simple web app. My initial impression is positive. I’m still figuring out some of the trickier aspects of how to manage bindings. But I’m genuinely impressed by how easy it is to handle coding stuff […] 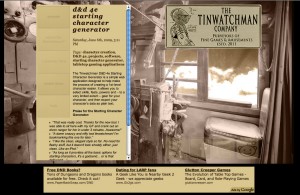